*I had this post all ready to go a few weeks ago. But I missed that whole Don’t forget to click on the “publish” button thing and it never went live. #goodjobJen. So here we go, a couple of Thanksgiving(isn) pages and an Autumn page. Because it’s already December and just now feeling fallish down here.

I’ve been a very good scrapper and December Daily-er lately, but a pretty bad blogger and sharer. My Drafts and Projects folders are getting out of control so I need to work on that. So be prepared for a slew of pages, fun plans for next year, and a few tweaks to ye olde blog in the next couple of weeks. Oh and a billion or so pics from our Louisiana trip. 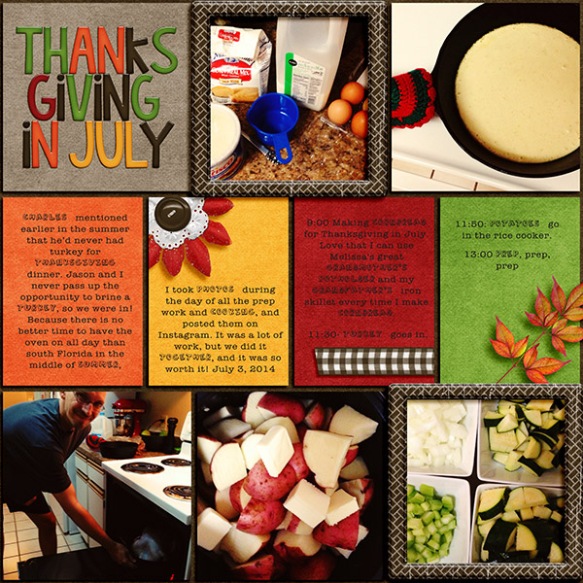 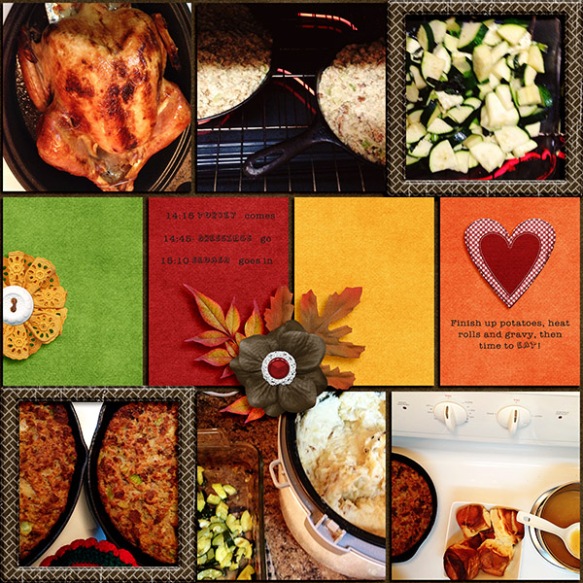 Journaling reads- C mentioned earlier in the summer that he’d never had turkey for Thanksgiving dinner. Jason and I never pass up the opportunity to brine a turkey, so we were in! Because there is no better time to have the oven on all day than south Florida in the middle of summer, right?

I took photos during the day of all the prep work and cooking, and posted them on Instagram. It was a lot of work, but we did it together, and it was so worth it! July 3, 2014 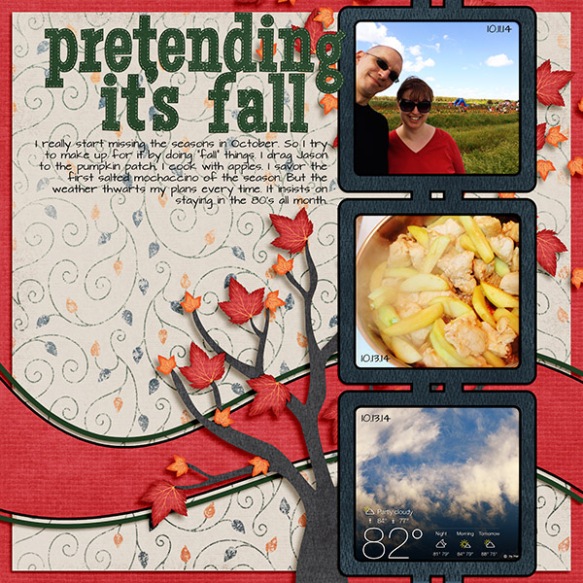 Journaling reads- I really start missing the seasons in October. So I try to make up for it by doing “fall” things. I drag Jason to the pumpkin patch, I cook with apples. I savor the first salted mochaccino of the season. But the weather thwarts my plans every time. It insists on staying in the 80’s all month.

Let’s take a trip in the Way Back machine and revisit some of my old Halloween and Fall pages! Doesn’t that sound fun? (And also embarrassing?) Keep in mind, I made some of these five years ago*. So be gentle in your mocking, okay? 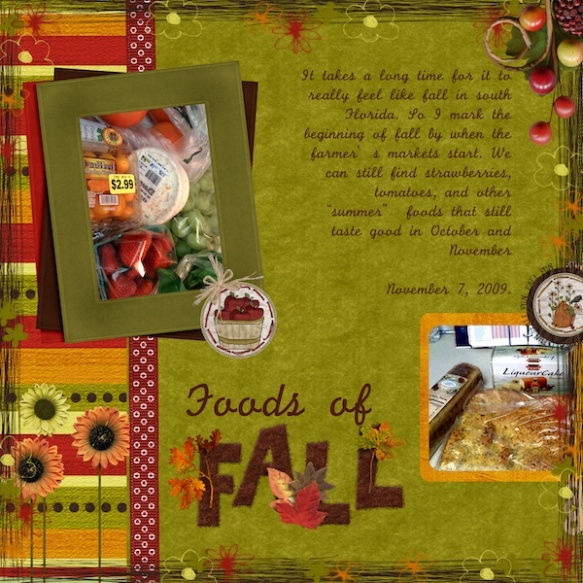 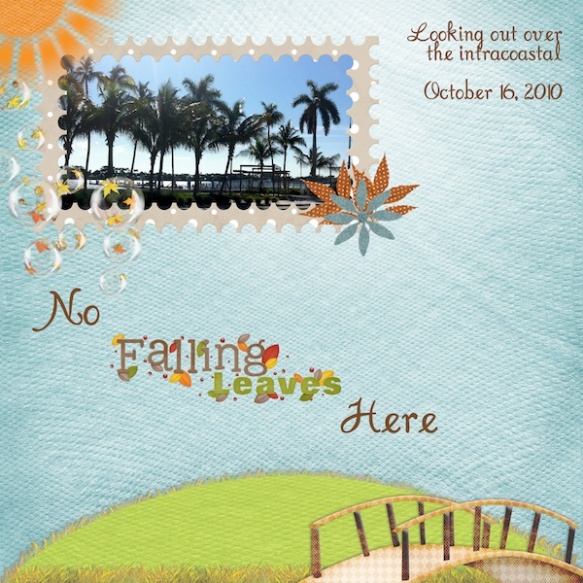 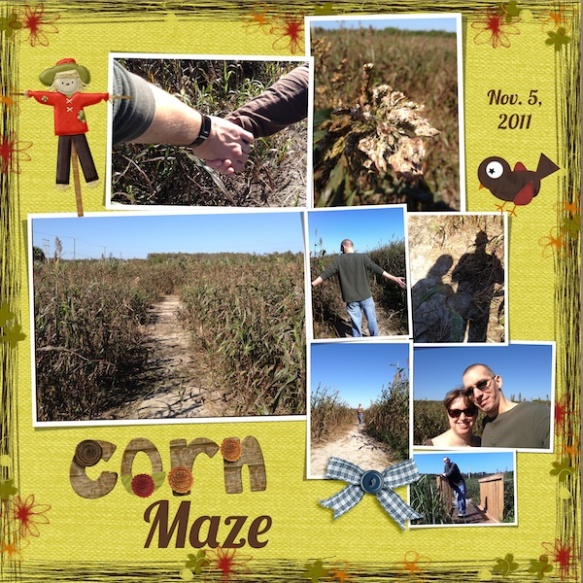 Living in SoFlo, I really miss having real seasons (other than Hurricane Season and the rest of the year). But there are definitely advantages to living here, like strawberries and tomatoes in November. 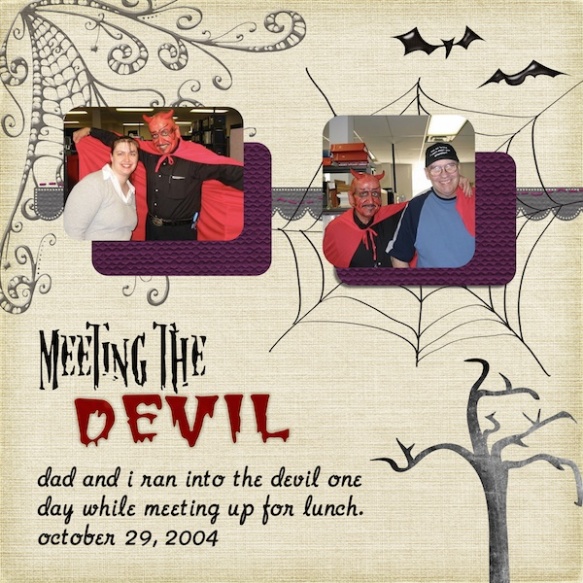 One of my favorite Halloween pages ever! 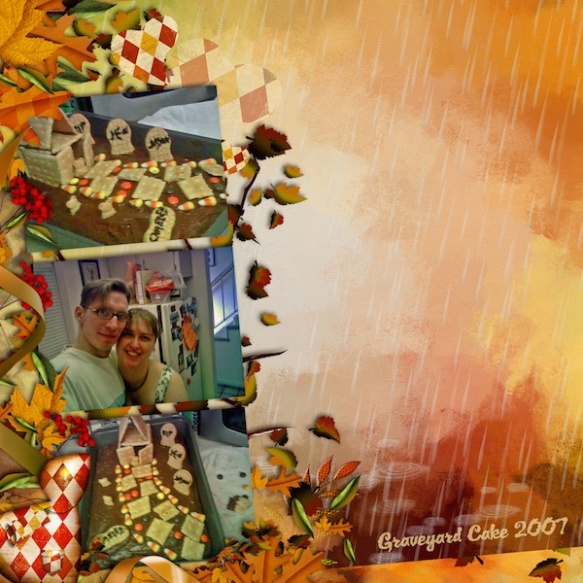 I used to make Graveyard Cake a lot before I got married. Jason and I made it together that year. We looked so young! 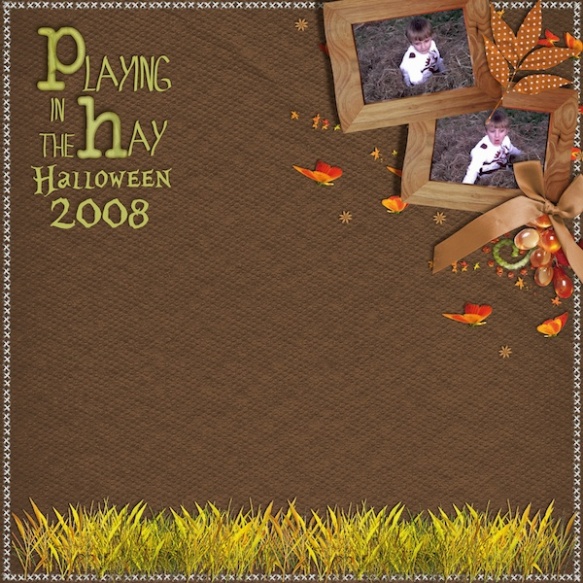 Speaking of young, check out teeny C! This was the one and only year that we got him on Halloween, so I’ve made like five pages from that night. (He was a storm trooper, in case you can’t tell from the bad Palm Treo pictures. 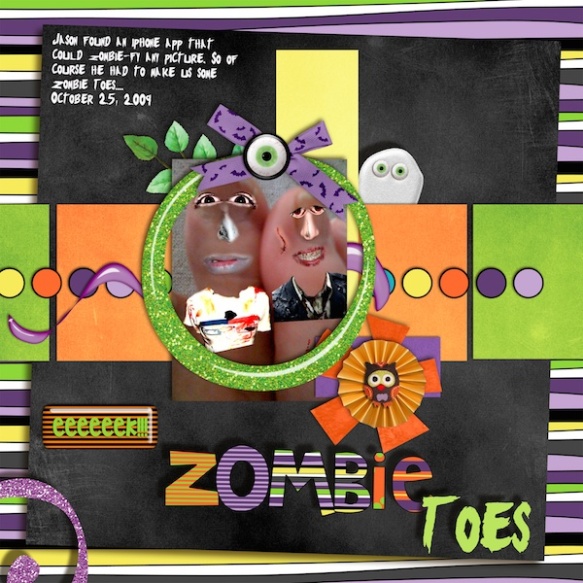 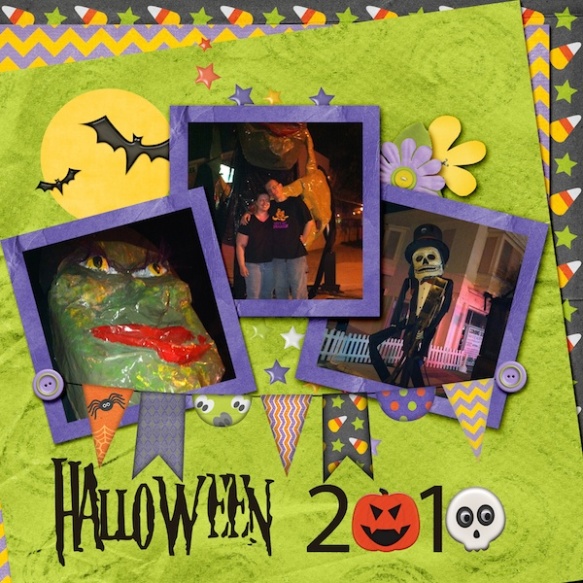 Best Halloween ever. I need to make an accompanying page for that story… 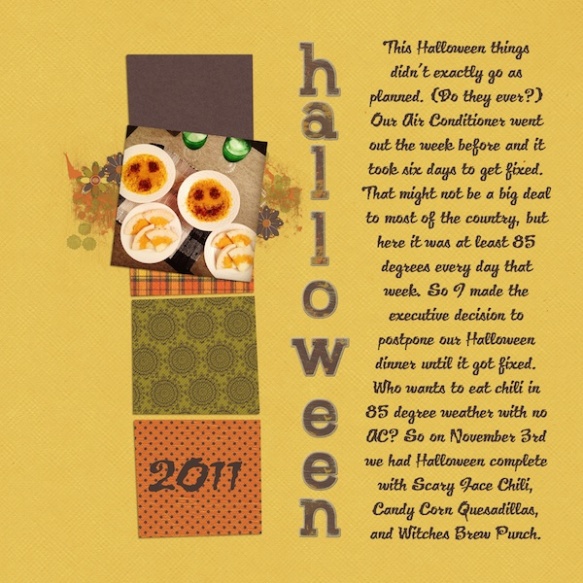 Worst Halloween ever. Well worst since I’ve been married. The worst was in 1997 when I stepped on a nail and had to get a tetanus shot. 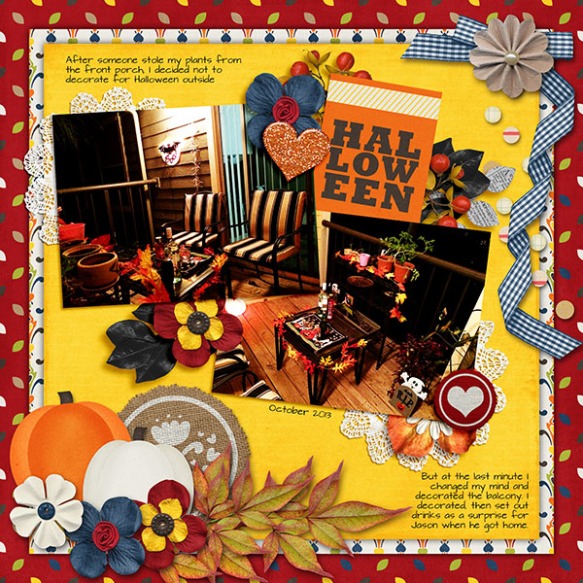 And finally, a page I made last week talking about Halloween 2013.

Journaling reads- After someone stole my plants from the front porch, I decided not to decorate for Halloween outside. But at the last minute I changed my mind and decorated the balcony. I decorated, then set out drinks as a surprise for Jason when he got home.

*These were made before I started keeping track of credits in the metadata of my LO’s so I don’t have that info.

I loved this collection by Mandy. I’ve been lucky enough to have a ton of fall themed kits to work with this season. I have very limited “fall” photos, but I pulled out a couple for this kit, both from the same day. These were taken on our way to Nashville for the Super Secret Thanksgiving Surprise last year. 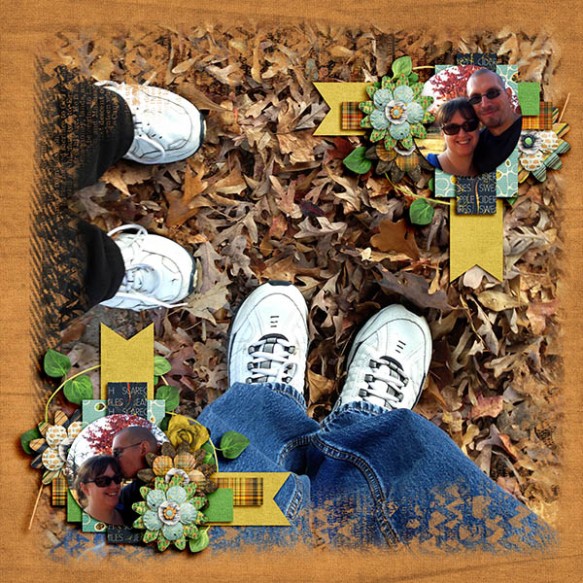 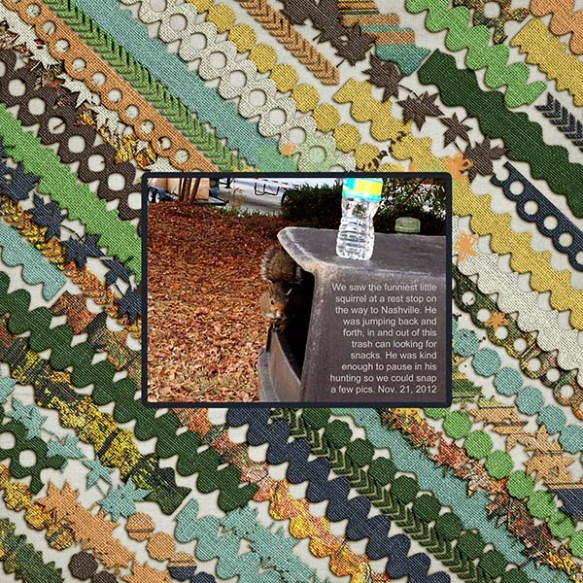 Journaling reads- We saw the funniest little squirrel at a rest stop on the way to Nashville. He was jumping back and forth, in and out of this trash can looking for snacks. He was kind enough to pause in his hunting so we could snap a few pics. Nov. 21, 2012

*I am a Creative Team Member. This means that I receive free products in exchange for making and advertising layouts for designers. However, the opinions expressed here are my own. The enthusiasm expressed here is definitely my own. See more of my CT layouts here.

Have I mentioned that I love fall? Oh yeah maybe I did. Like 20 times. 🙂

Anyway I thought it would be fun to make a Fall Manifesto like I did this summer. And to include Jason in on it too. So here’s what we came up with. 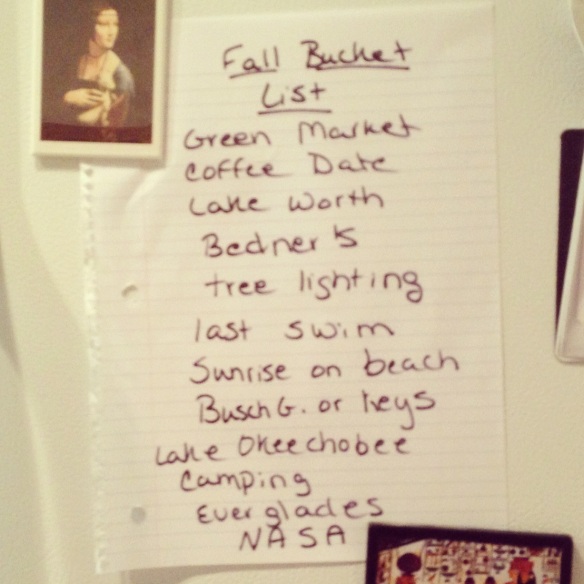 I think we got a little overly ambitious. (and we could have kept going and going…) But who knows? We could do all that stuff. We’ll have fun trying!

In case you can’t get past my bad handwriting/ bad photography, here’s the list.

While I’m waiting on that, there are tons of fun fall things to watch right now. The new fall season of some of our favorite shows have finally arrived, and we’ve found a few new ones we like too.

There have been a couple of disappointments, like Revolution and The New Normal. I was pretty excited for both of these, but they were both meh . I think Jericho and Modern Family did it first and did it better.

We weren’t especially looking forward to The Mindy Project or Go On, but both have been surprisingly good so far. I usually hate to watch anything medical related for entertainment, but TMP is mostly focused on her love life, or lack thereof. She just happens to also be a doctor. We’ve only seen one episode of Go On, but it was pretty cute, so it got added to the DVR a little late in the game.

As for old favorites coming back… Loving the direction they’ve taken with Once Upon A Time! We were kind of worried what they would do with everyone getting their memories back finally, but now they’ve added in a new place and a few new characters they’re keeping things fresh.

NCIS’s first couple of episodes were kind of downers but they picked it up and it’s getting back to the same show we know and love.

Up All Night is still hilarious, especially the trapeze episode. I mentioned before how much I would love to take trapeze lessons 🙂

And last, but not least… Vampire Diaries!!! Okay, I know. I will not defend my love for VD here. I will just say that for a show written for teenagers, it’s pretty damned good. The end. This season starts out with Elena waking up changed. (I won’t get spoilery in case anyone wants to catch up on the first couple of seasons on Netflix streaming. Which you should). Anyway, Elena is changed, but will she stay that way? Or will Bonnie find a way to stop things? And who’s this new crazy priest? And will the humans be able to take back Mystic Falls from the sups? And wtf is up with Tyler? And can poor Rebecca get a freakin’ break already? I think the best part for me was when Gram showed up. Pretty great. I might have jumped up and down and pointed just a little. Can’t wait for tonight’s episode.

Yes, we watch too much TV. That actually doesn’t even scratch the surface of our DVR to-record list. There are several shows, like Covert Affairs and CSI that we record too. These are just the ones we keep up with regularly. The rest we save for when our other shows have gone to reruns or on hiatus.

I’m so ready for fall. Ready for cooler weather. Ready for long sleeved shirts. Ready for festivals and farmers markets. Ready to pick strawberries and tomatoes one more time. Ready to snuggle under blankets. Ready for that crisp feel in the air that gives a little spring in the step. Ready to decorate. Ready to bake. Ready to enjoy the time alone with Jason. Ready for a road trip. Fall is my favorite. 🙂

Fun stuff happen in the fall. (I apologize ahead of time for the following terrible photos). 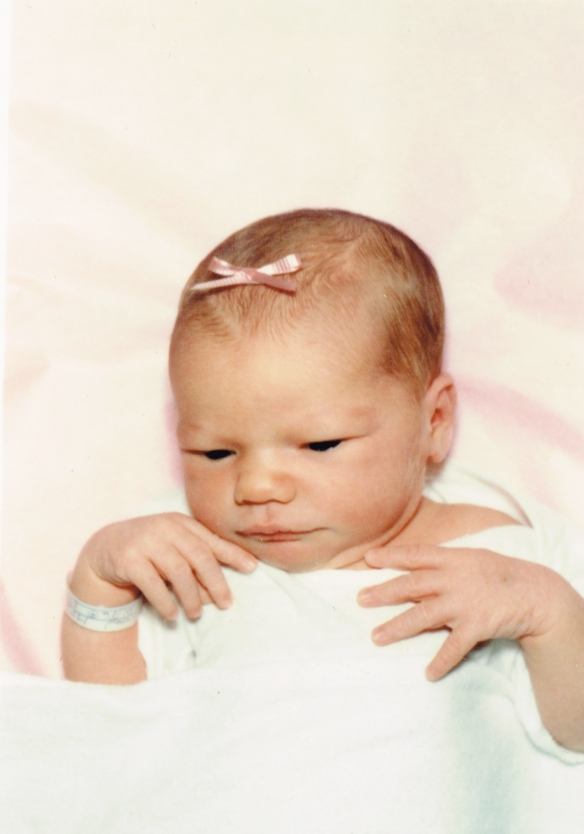 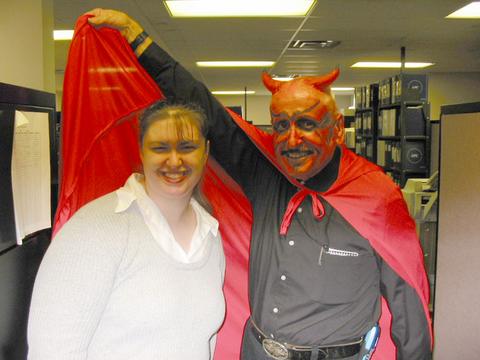 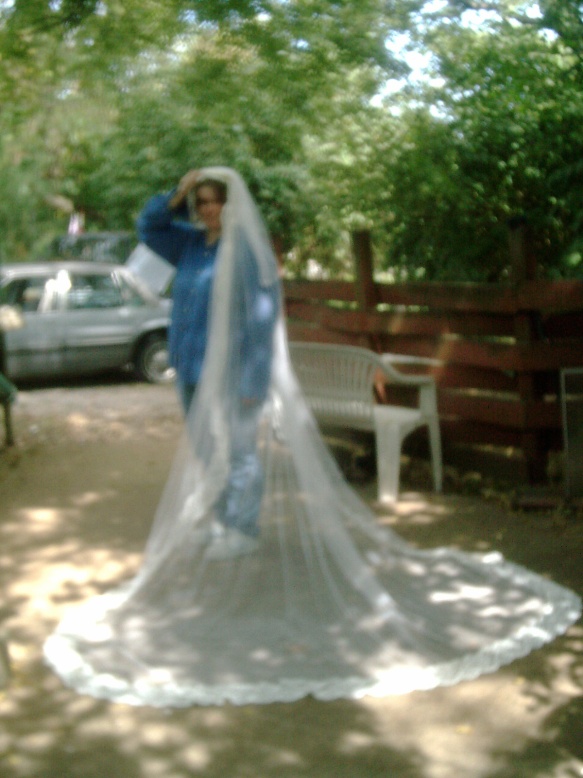 We made haunted graveyard cakes (2007) 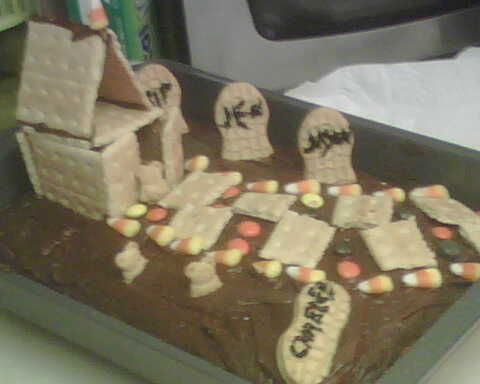 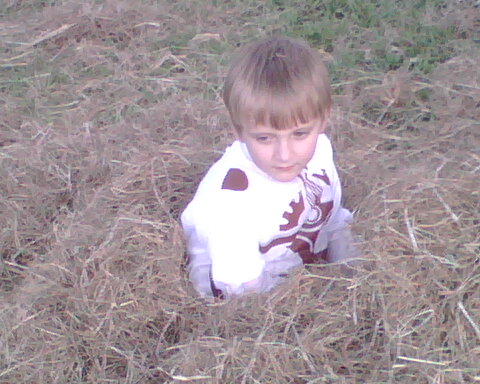 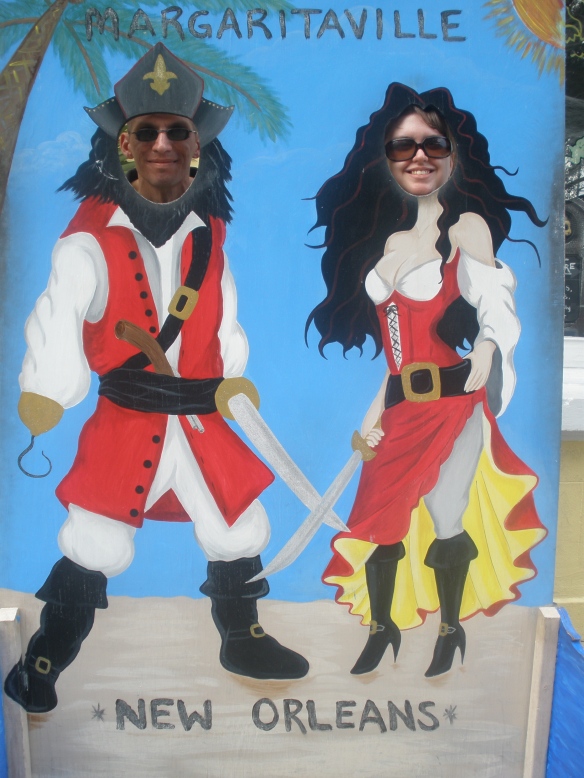 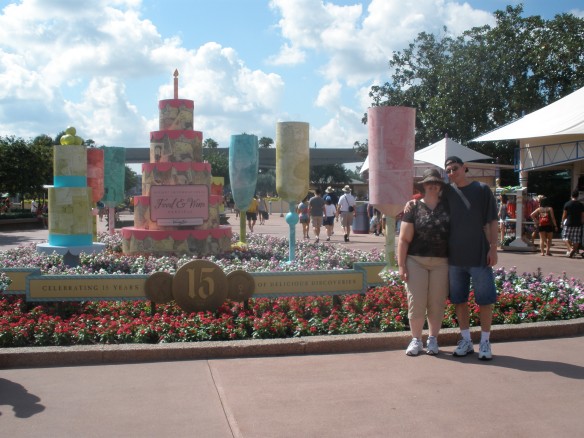 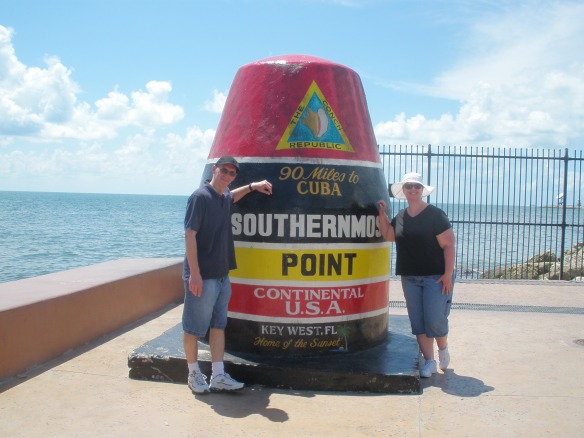