I’m excited to share my first two pages for the Simple Scrapper CT! I have to say, looking through the back catalog of templates and Story Starters was tough- so many awesome designs and prompts to chose from. 🙂

My first page used one of this month’s templates. I changed it up a bit to fit my theme and style. I used an older Story Starter to tell the story of meeting our friend Heidi. I’ve asked Jason to write out a bit of journaling for me about how he met Antoine, and I’m hoping to put them side by side in my People We Love LOM album.

Journaling reads-  I still remember the first time we met Heidi. Jason and Antoine had been friends for years, and we were excited to finally meet this special lady we’ve heard so much about. She was so quiet, I think she said barely five words all afternoon! It’s been a lot of fun getting to know her over the past couple of years. Now she’s just as talkative and crazy as the rest of us! It was an honor to photograph her getting ready for her big day.

Here’s another page I made last month for their wedding.

For my second page, I used one of December’s prompts with an older template. This page tells the story of our first trip to Hogwart’s.

Journaling reads- Jason and I are huge Harry Potter fans. When we heard that HP was coming to Universal Studios, we knew we HAD to go. We made plans to stay the weekend in Orlando a few days after the opening, in June 2010. The line was insane, winding all through the park. And that was just the line to get into the town of Hogsmeade. That doesn’t count the lines for rides. It was SO worth it though! Seeing Hogwarts for the first time was something that I’ll never forget. We actually didn’t mind the line so much once we got close to the school because there were so many interesting details to look at. The greenhouse was very cool, and the interior of the school was amazing! The ride was almost secondary to the feeling you got of actually being inside Hogwarts! It’s been almost five years, and we’ve been a couple more times, but I still get giddy thinking about that first time. For me, the magic of Harry Potter beats out the magic of Disney any day!

Here’s another HP page I made, from a different visit. This is totally making me want to visit Universal again!

*I am a Creative Team Member. This means that I receive free products in exchange for making and advertising layouts for designers. However, the opinions expressed here are my own. The enthusiasm expressed here is definitely my own. See more of my CT layouts here.

Remember when I used to make a page or two for each week? Yeah, me neither. It’s been 3+ pages per week for awhile now. And weirdly that is not stressing me out one bit! I think I have my routine for these pages pretty down pat at this point. And it still stresses me out way more to narrow down my favorite photos than it does to make a few extra pages, so whatever works.

Journaling reads- This week we were in Orlando for Jason’s work. It was fun to meet more of his colleagues and to get to see him doing what he does best. The weather was crummy, but we managed to go for a few walks around the resort. While he was working, I did a lot of writing and scrapbooking in our room.

And a side note here to explain the sparse journaling. I’ll go ahead and get this out of the way…. we are not big Disney people. I know, I know. Sacrilege! So here’s the deal, we’ve been to Orlando at least a dozen times over the years we’ve been married and the luster has worn off. We just like Busch Gardens a lot more than the Disney parks. Unless it involves Harry Potter or food festivals, I’m not going to get overly excited about a trip to Orlando. Plus we actually were there for work, so there’s that.

I have to say though, the resort was gorgeous. I took some of my very favorite photos all year during some of our walks.

A couple of the photos above were blurred for privacy. Jason was able to snap a bunch of pictures during the conference, which was awesome. I love getting bits of his work life in Project Life.

Some pictures of our hotel. I always try to get at least a few from our room, and since this is where I spent the majority of the week I took a lot. It was really nice to have some quiet time alone to write and play with pictures. See what a homebody I am, even in one of the biggest tourist destinations in the country? 😛 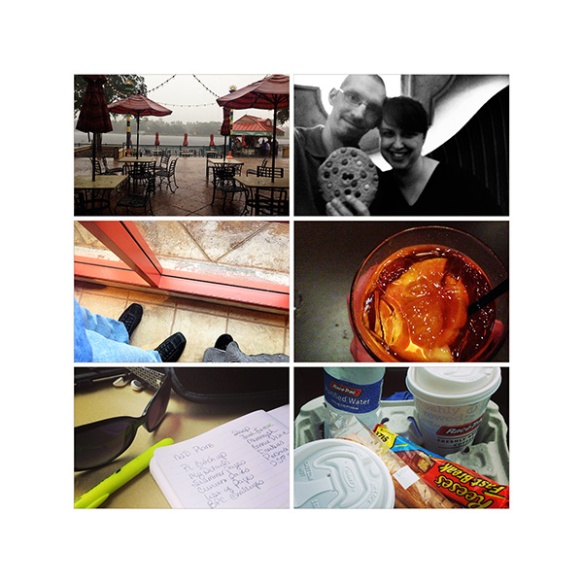 And finally, a few last random pics- rain, head-sized cookies, waiting on more rain, my drink of choice this trip (Old Fashioned), making lists, and our go-to travel munchies on the way back home.

*Project Life was invented by Becky Higgins. You can learn more about it here. My Project Life pages can be found here. 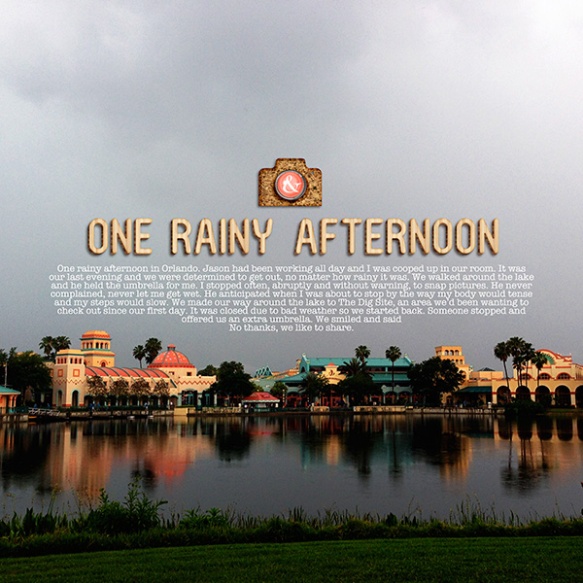 I did a LO for Megan’s Quick and Easy challenge. Because what can be more quick and easy than a photo that takes up the whole page? Add some journaling and a couple of ellies and call it done. I need more of these pages in my life.

Journaling reads- One rainy afternoon in Orlando. Jason had been working all day and I was cooped up in our room. It was our last evening and we were determined to get out, no matter how rainy it was. We walked around the lake and he held the umbrella for me. I stopped often, abruptly and without warning, to snap pictures. He never complained, never let me get wet. He anticipated when I was about to stop by the way my body would tense and my steps would slow. We made our way around the lake to The Dig Site, an area we’d been wanting to check out since our first day. It was closed due to bad weather so we started back. Someone stopped and offered us an extra umbrella. We smiled and said “No thanks, we like to share”.