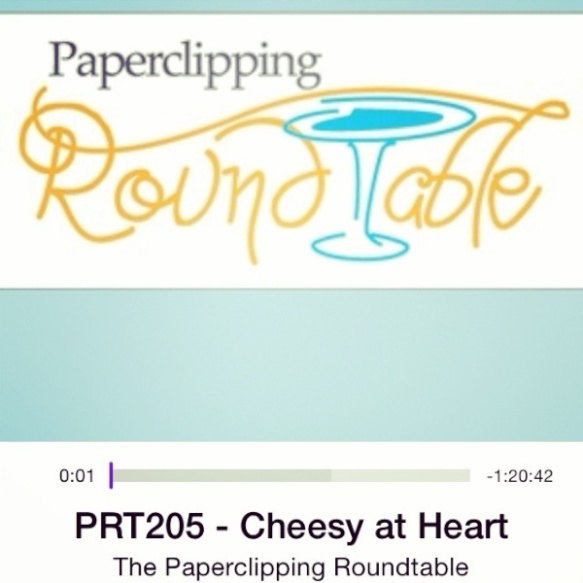 So this just happened…

I was super excited (and nervous!) to be a guest on the Paperclipping Roundtable yesterday. Davida, Beth, and I talked all about scrapping our husbands. It was a lot of fun! It was very cool getting to know these ladies and sharing our experiences trying to scrap those special relationships.

Here are a few pages I mentioned in the podcast. I did lots more for the Romantic Scrapbooking class, which I’ll share later. But I wanted a separate post for the specific pages and things I talked about on the show. Fair warning, it’s going to be sappy over here for a bit…

The page where it all started.

Taking a picture of a gift can lead to a bigger story about your relationship.

Our silly “I love you day” pics.

Another “I Love You” day page using no photos. Journaling cards or fancy tags are a great way to make a page without photos. Plus- potty people! (Also I think I said that day was in April. I meant March :P)

And here are some extra links for your viewing pleasure.

The other Second Life couple with the story that’s way more romantic than ours.

The excellent My Details class.

And if you’re not totally grossed out by now, here’s our love story.

I also want to give a huge thank you to Noell for allowing me to be on the show. PRT has been a huge part of my life the past few years. I have learned so much from listening to you and your fabulous guests. It was an honor to be a part of it!

2. Call Me Maybe, orchestra edition. Okay I’m sure I’m probably the last person on earth to see this, but just in case I’m not…

4. Green things. I planted iris bulbs this week and I can’t wait to go get more plant-y goodness this weekend!

5. Pop Culture Happy hour podcast. Catching up on a bunch of back episodes and really enjoying them.

Ice Cream for Breakfast Day on Thursday.
The Mentalist. Still. It’s our new comfort show.
Lazy weekend mornings when we can sleep until 9 and we don’t feel like Death on a Cracker.

Watching Real Housewives of OC reruns.
Reading Skinned again. Jason started it this week, so I’m rereading it.
Listening to Justin Timberlake’s new album free on iTunes.
Making many failed dishes. (I should not cook while sick).
Feeling congested.
Planning nothing really, trying to survive now atm.
Loving that he makes me laugh when I’m super cranky.
Blowing my nose constantly.
Missing the Pop Stuff podcast, but happy the hosts are going on to Stuff You Missed in History Class.
Craving chicken.

Super Duper happy and excited that the Veronica Mars Kickstarter has totally surpassed their goal! And in only one day!

Watching “Dead Body” shows. The Mentalist, CSI, and Elementary. Finished up this season of Top Chef.
Reading project Life blogs looking for inspiration.
Listening to back episodes of Paperclipping Roundtable
Making lots of blog posts (does that count?)
Feeling less stressed than I have all year.
Planning ways to decorate our bedroom.
Loving that Jason is getting home before it gets dark.
Going to the gym in the evening this week.
Keeping the grocery bill near $100 a week for over a month. (It was getting out of control).
Thinking of covering the entire house with double sided tape.
Learning new tricks in WireTap Studio.
Doing weights or Pilates every day this week.

This has been a week of ups and downs. Here are some of the highlights.

1. Jason is on the road to recovery. He’s asked me to keep details private, so I’ll respect that. I’m just happy everything went well and he got to stay home a few days this week. So great to have him home all day. I think the worst is hopefully over and we can get back to normal in the next couple of weeks. So happy and relieved. This has been a stressful couple of weeks for us.

2. This soup. My first attempt at cream of chicken soup and it was fantastic!

3. How Stuff Works podcasts. I love almost all of these podcasts. A couple of recent favorites are the Cult of Domesticity from Stuff Mom Never Told You (a must-listen for any hipster/ lifestyle blogger/ home cooks) and The Parenthood Wars from PopStuff.

4. Netflix Streaming. We’re blasting through the last season of Alias right now. The implausibility verges on the ridiculous sometimes, but it’s a nice escape. And they still make our jaws drop every couple of episodes. Last weekend we had an Independent film marathon. Ten Inch Hero, HottieBoombaLottie, Splinterheads, and Miss Nobody. All really good. Nice, light funny movies.

5. Cooking at home. Sometimes I get so tired of cooking. I just want to grab a box or bag of something and throw it in the oven or microwave. We all have days like that, right? Well I think my days of boxes and bags are numbered. I found something so disgusting in a bag of fries last weekend that I think I’m completely turned off of processed foods for the foreseeable future. It still makes me shudder to think about it. So my new rule is, if I can’t see what’s in the package, I’m going to think twice before buying it.  Which means if I want fries, I guess I’ll have to learn how to fry things. Which I’m terrible at. Anyone know of any good baked fries recipes?

I got the newest iPhone this weekend. Best Buy has a great buyback program and they took my old iPhone 4 back for $150, so we only ended up paying $50. Pretty sweet. (My phone was in excellent condition thanks to my Otter Box and we still had the box and all the cords and such, so that’s partially why I got such a good price).

So here’s my review.

Pros:
Speed. So much faster than my 4, especially the camera. Huge improvement there.
Siri. I know it’s a gimmick, and still technically in beta (I think), but I really hate to type, so anything that let’s me easily dictate instead of typing is a big plus. I’ve used Siri several times today already, mostly for setting timers and texting.
Camera. Not only super fast, but great picture quality. The thing I was most looking forward to is the ability to do panoramic photos. I haven’t been able to do any just yet, but hopefully by next weekend I’ll be a bit steadier on my feet and I can try it out.
Ease of switching phones. I backed up right before I left home that day, so all of my info was ready in the cloud to start using right away once we bought the new phone. There were some hangups, most notably with my iTunes music and podcasts. I ended up having to plug the phone in to finish transferring everything over. But overall it was super easy and I don’t think I cursed once.

Cons:
Siri. The network isn’t exactly zippy 100% of the time. I had to tell Siri who my husband was at least three times before it stuck, due to network timeouts.
Screen size. I know everyone was drooling over the larger screen, and I thought I would too. But it still feels awkward to me, especially when taking screenshots. Probably something I’ll get used to though.
Headphones. I take issue with the apple commercial featuring the headphones. It’s annoying and arrogant. (I know Jason is rolling his eyes right now). So I wasn’t exactly looking forward to the new design anyway. I have weird ears. Headphones never stay in. Ever. So the new headphones went to Jason. Which makes us both happy. And if anyone has any headphone recs, I’m all ears 😛
Podcast app. I know this is an OS thing, and not strictly in iPhone 5 thing, but let me just take a minute to jump on my soapbox and say, I HATE the podcast app. I have been a podcast junkie for years, and have spent a lot of time carefully curating smart playlists to maximize my podcast enjoyment. And the stupid Podcast app took all of that functionality away. They broke something that was just fine. I tried to work with it, I really did. But it pissed me off to the point that I deleted the app entirely. Now my podcasts come through the regular iTunes app again. It’s a little buggy now and then, but much better than the stupid stupid stupid Podcast app.

To be honest, I didn’t want to upgrade at all. I was still mostly happy with my old phone. But Jason found the buyback offer and it was hard to pass up. I’m loving the speed and the camera the most right now. All in all, I’m really happy with the new phone.

I’m going to take a small break from the usual scrapping/ food/ moving posts to say a few words on the end of an era. Today I listened to the very last edition of the NYT Front Page podcast. This week will also be the last episode of CNET’s Buzz Out Loud. I’ve been listening to both of these for years.

Sometime in 2009 I got so sick of the news that I stopped watching and listening to it. Everything was bad news- banks failing, unemployment, and the constant repetition of the phrase “in these tough economic times”. For my own mental health I decided to let the news go for a while. It was the same day after day anyway. I got rid of all my network news podcasts (and there were a lot of them). The only one I really kept was Front Page. That 5-6 minutes of news a day kept me a little less ignorant about world events. And even though the news continued to be mostly bad, the soothing voice of James Barron made it seem not so bad.

I can’t remember when I first started listening to Buzz Out Loud. It must have been 2007 at the latest. It was one of the first podcasts I listened to. I started listening to BOL to… and this is embarrassing to admit… have something to talk to my husband about. Yeah I know, I’m a 50’s throwback. But he loved tech and I was looking for some way to learn more about it so I could have reasonably intelligent conversations. I enjoyed the banter between Tom and Molly, and I eventually developed my own love of tech. Nearly every podcast I listen to today can trace it’s roots through BOL. Now I do have to say that I think in the past few months, BOL has gone downhill. When it went from a daily to a weekly podcast, it was almost over for me. I found myself skipping whole episodes, something I never did in the past. I did not believe the “There’s less of it, so it’ll be BETTER” line. I am sad to see it go, but I choose to remember the good times.

Goodbye old friends. My morning playlist won’t be the same without you.