I’ve been wanting to scrap California lately for some reason. We’ve been there three times picking up C over the years and I’ve only made a handful of pages. I think it’s about time that I fluffed out that album a bit more.

Looking at all three trips is super overwhelming. I decided to concentrate on our 2009 trip right now. This was before I started scrapping, and there weren’t a ton of photos. I sat down with my photos and picked out the best ones, about 130 over three days.

Before last week I’d only scrapped two pages for our California album from this trip (plus a couple more for other albums) I flipped through the pages I’d already made to see if I could discover themes. I don’t worry about being matchy-matchy with my pages in a particular album. But after I’ve made a few pages I like to make a mental note of similarities and decide if that’s something I want to continue in future pages.

I noticed that almost all of the pages from all three years had a mix of blue and neutrals, with a bit of red, yellow and orange thrown in. I like the neutral+blue combo, so I made a conscious decision to keep that color scheme. It’s pretty common, especially in travel themed kits so It should be easy to find kits to use.

I think this is a good place to share my travel album philosophy. Other than my Project Life pages, all of my LO’s go into the Library of Memories system. I have several travel albums for places we go. If I know that I’ll make a bunch of pages on one place it gets a separate album. California has it’s own album even though it has less than ten pages right now.

Other albums grow more organically. I started out with one Florida album but realized that it needed to be split up once I had been scrapbooking for a while. Now I have several for our favorite places. Generally if I’ve made ten pages and plan to make more, a location will graduate to it’s own album. I like to keep places together, as opposed to an album for each trip. That way it’s easier for me to see things change over time.

Still with me? Okay keeping all of that in mind, I made a list of pages I’d like to make based on the photos and the LO’s I’d already made. I came up with 18 pages. This is not to say that I’m going to sit right down and do 18 pages. I don’t ever worry about completed albums. They’re all works in progress. I hope to be scrapping about California for years! But that gave me a starting point and direction.

Now that I’ve written a book about all that, here are some of the pages I made. 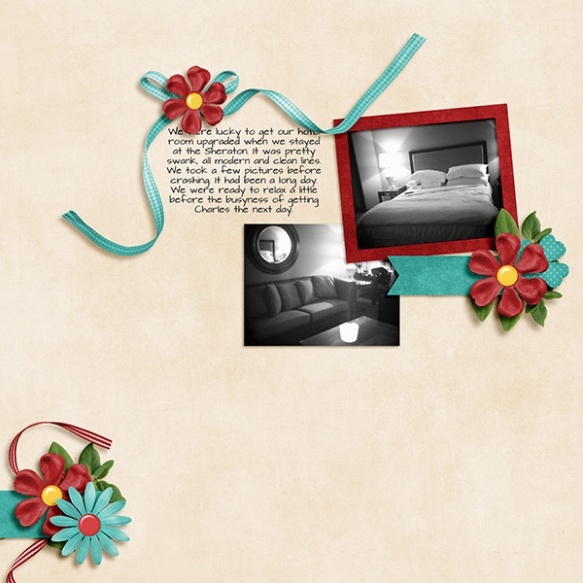 Inspired by- A template challenge at Ginger Scraps

Journaling reads- We were lucky to get our hotel room upgraded when we stayed at the Sheraton. It was pretty swank, all modern and clean lines. We took a few pictures before crashing. It had been a long day. We were ready to relax a little before the busyness of getting Charles the next day. 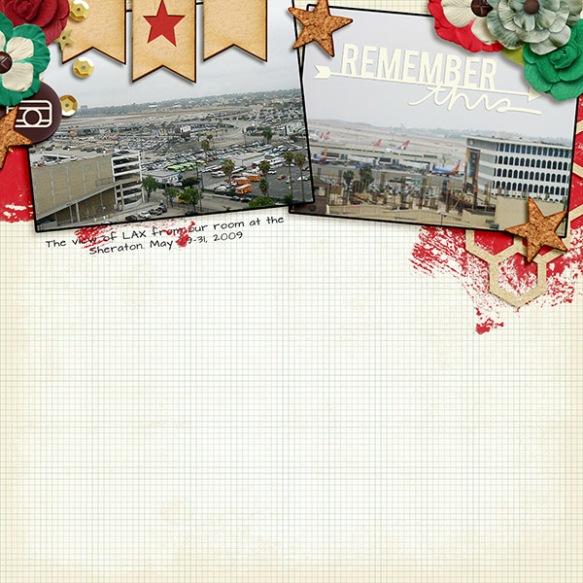 Inspired by- A challenge at the Lilypad to scrap on the edge of the page. 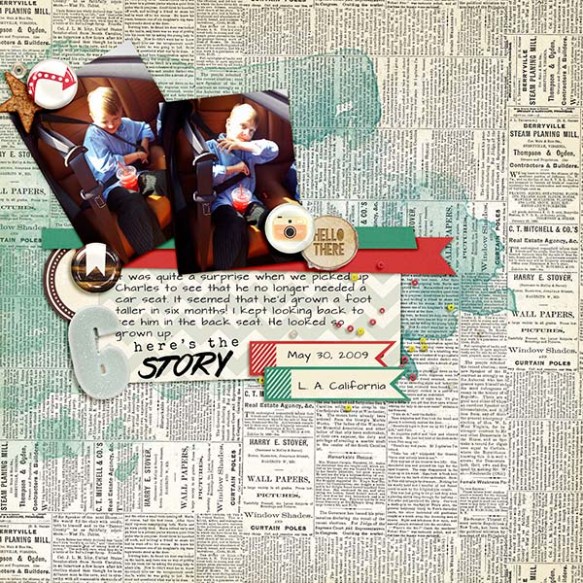 Inspired by- Template Challenge at TLP

Journaling reads- It was quite a surprise when we picked up C to see that he no longer needed a car seat. It seemed that he’d grown a foot taller in six months! I kept looking back to see him in the back seat. He looked so grown up.

LOM album- For right now I’ll put this one in California. I’m re-evaluating what I want to do with C’s pages. I have a huge backlog of pages that I need to reprint for him, so I’m thinking about maybe doing a Blurb book instead. He’s more likely to look through that than a big scrapbook. I’m not sure, just something I’m kicking around in my head.

I’m pretty happy that I was able to scrap for Cali pages in September. (The other one can be found here). I’ve been making lots of pages this past week that I’m excited to share!